How Popular Is Plastic Surgery Around the World? 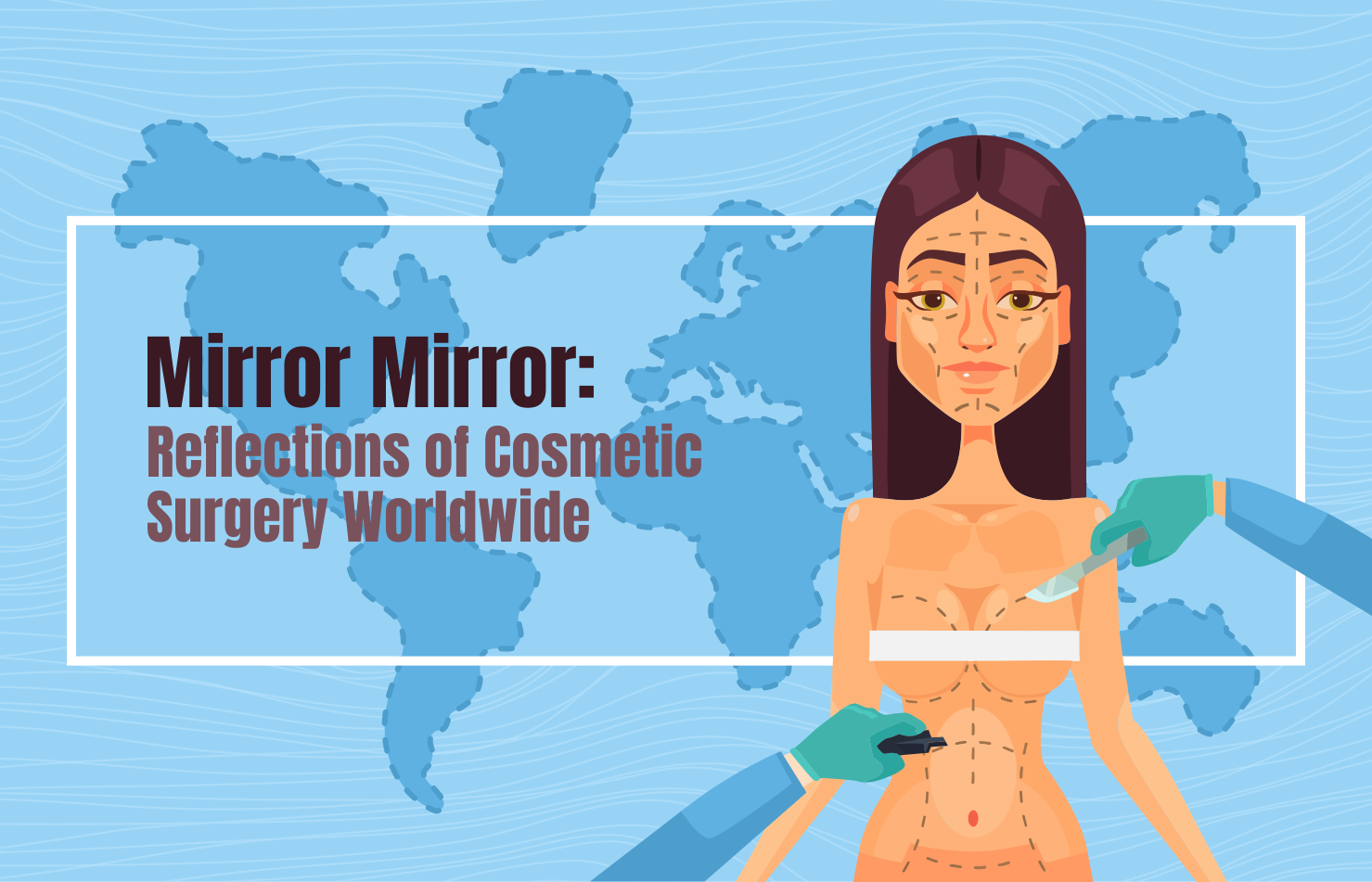 Beauty is in the eye of the beholder, but it is not necessarily in the eyes of the beheld. In today's image-obsessed world, it can be difficult to feel content in your own skin. As a result, more of us are turning to cosmetic surgeries to boost our self-esteem and improve our appearance. This report highlights the popularity of various plastic surgery procedures around the world.

Throughout the ages, beauty has been prized above all. Since as far back as the 16th century, people have been using cosmetic procedures to improve their looks, boost their self-confidence, all in the hope that their beauty will improve their social status. Today, with the advances in medical science, the variety of procedures offered worldwide is staggering. This section of the report categorizes the popularity of these surgeries across the globe. 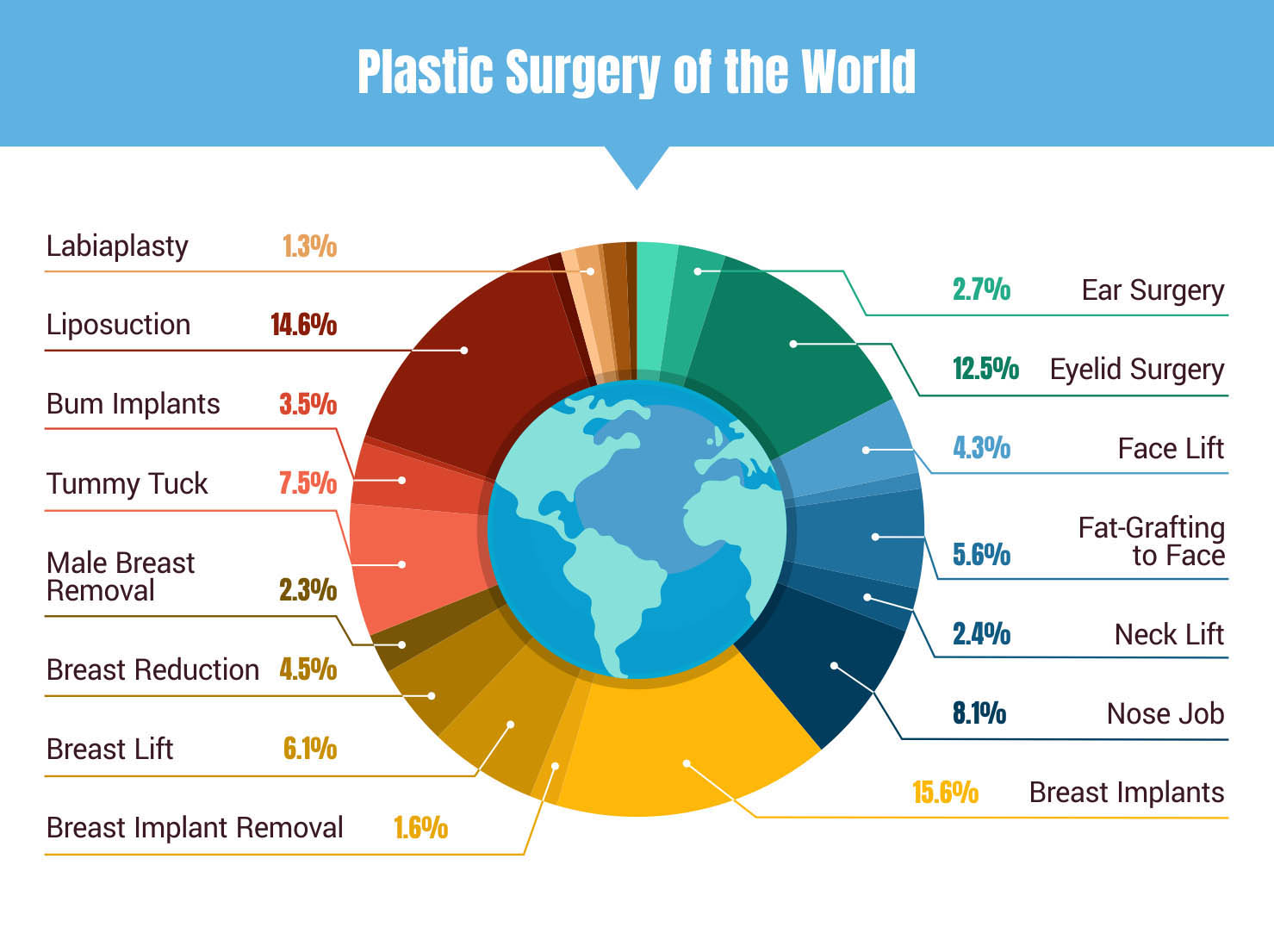 The procedure that often springs to mind first when thinking about cosmetic surgery, is breast enlargement. Unsurprisingly, worldwide statistics reflect this, with 15.5% of all cosmetic surgeries being breast implants. liposuction (removing excess fatty tissue) is the second most popular cosmetic surgery procedure worldwide. The least popular procedure is a labiaplasty, with just 1.3% of the worldwide population opting for this. Second to last, is breast implant removal, with 1.6% of the world perhaps feeling they’ve gone too far in their pursuit of perfection.

Today, a full range of cosmetic procedures are offered worldwide, however, the popularity of these surgeries varies between different countries. This section of the report covers plastic surgery hotspots worldwide. 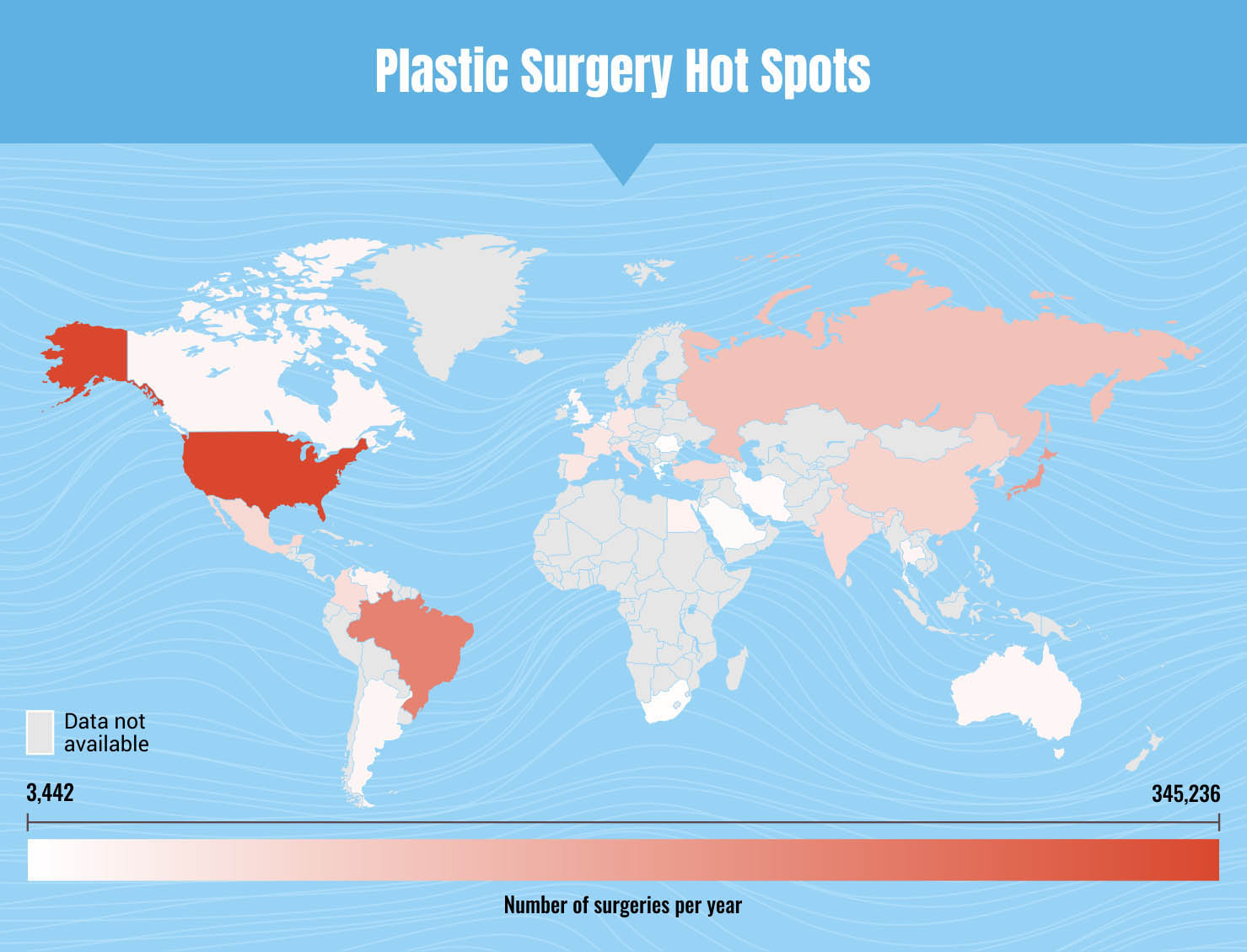 Unsurprisingly, North America leads the way in cosmetic surgery popularity across the world. This may be due in part to the US’s position on the world stage in steering the developed world’s tastes and perception of conventional beauty, through Hollywood and its fixation with beauty and youth. Interestingly, South America also rates highly on the global map - this could potentially be due to the cost of procedures being significantly cheaper than those offered in North America, and thus attracting clientele from further afield. Japan is also a highly popular nation for plastic surgery. This is in part due to the increasing westernization of Asian culture. Eye reshaping is particularly common in Japan, with clients opting for a more open “western” shape to their eyes. 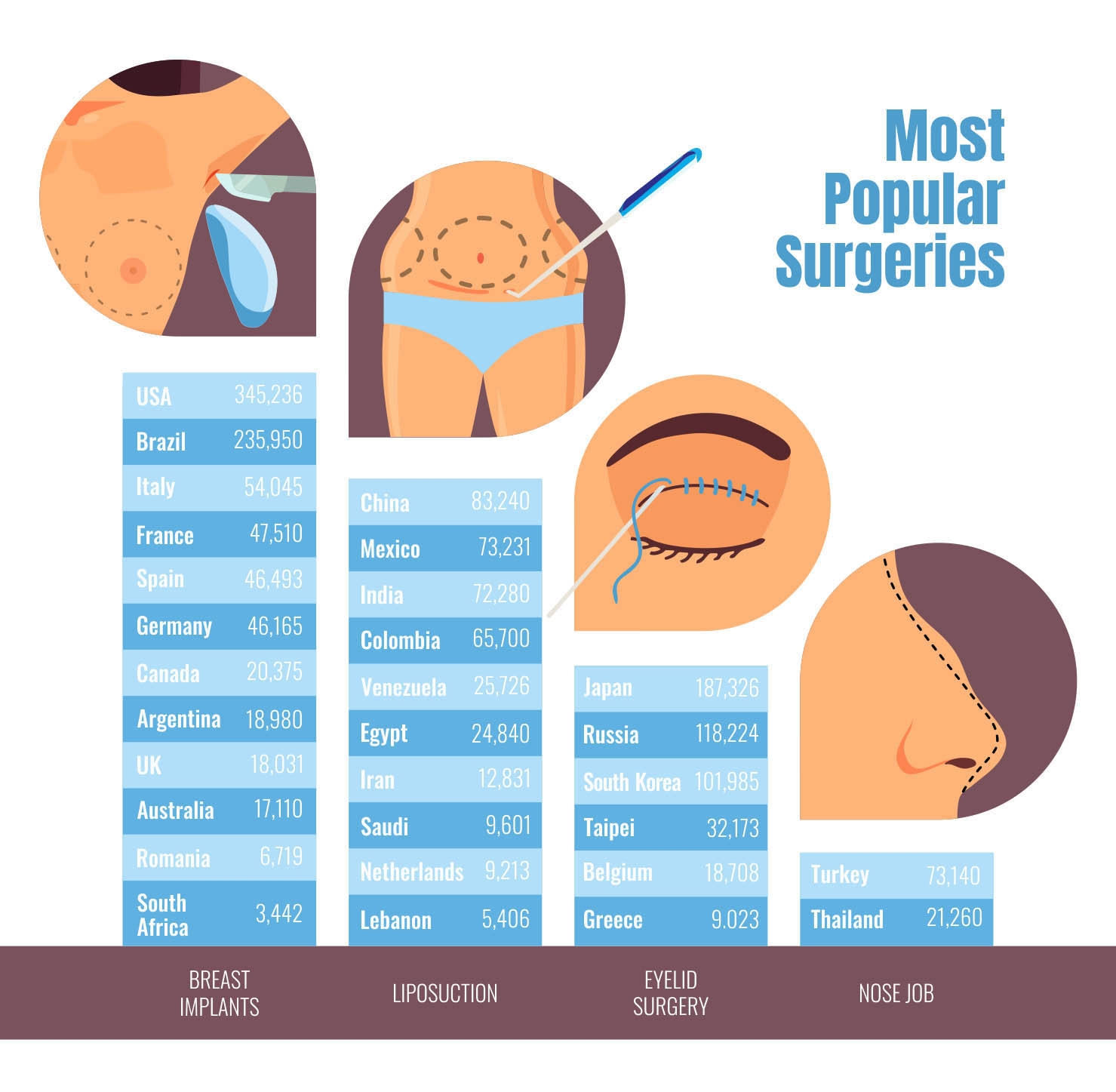 As one may have guessed, North America again leads the way in breast enlargement surgeries. There are many external factors to consider when hypothesizing the reason for this. One factor could again be Hollywood, and the American belief that ‘bigger is better’. Perhaps more surprising is the fact that China accounts for the highest number of liposuction surgeries per capita. This may be due to the relatively low cost of cosmetic procedures in China compared to the West. East Asia is the world center for eye reshaping and eyelid surgeries. Japan performs most operations per capita, followed by Russia and South Korea. This is largely due to the influence of Western beauty ideals on Asia culture resulting in a desire to appear more ‘Westernised’. Turkey is the worldwide no.1 for rhinoplasties or “nose-jobs” – closely followed by Thailand. This may again be due to the low relative cost of these procedures in Turkey and Thailand, attracting “cosmetic tourists”.

Across the globe, most cosmetic surgeries offered are consistent in their popularity. However, on closer inspection – there is some national variation that could potentially correlate with specific social and cultural differences. This section of the report illustrates the popularity of each surgical procedure in relation to each nation. 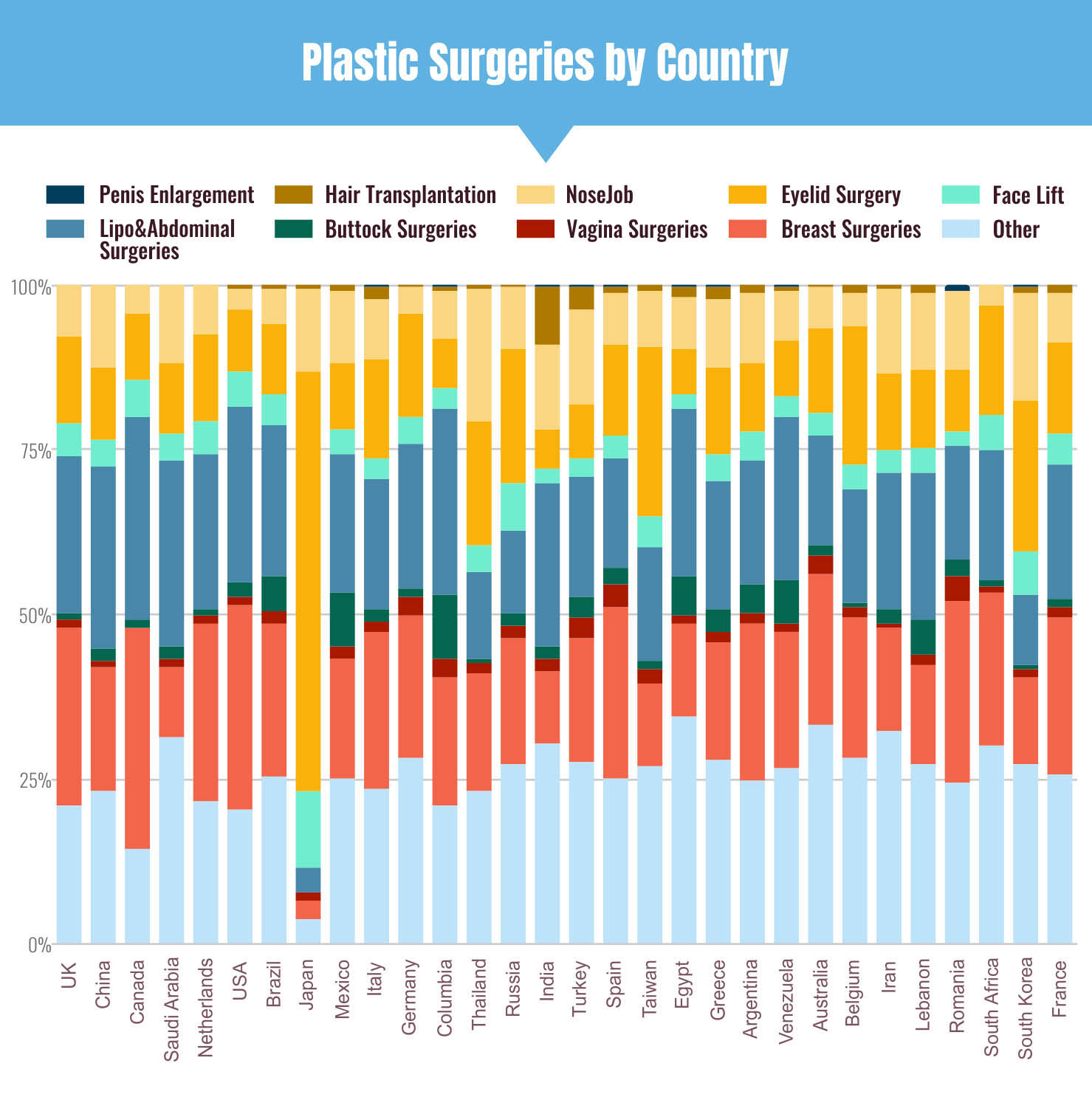 The clearest fluctuation in surgical popularity within specific nations is Japan - where the level of eyelid surgeries vastly outweighs any other country. Facelifts are the second most popular surgery here, and again are one of the highest worldwide. Speculation for the popularity of this kind of procedure here is again due to an increasing desire to appear more western, resulting in some people undergoing surgical procedures to alter the shape of their faces. Interestingly, however, all other surgeries in Japan are significantly lower than any other country. Canada rates highest worldwide for liposuction and abdominal surgeries, closely followed by Saudi Arabia.

In the midst of all these facts, figures, and graphs, it can be easy to lose the thread and forget what the whole campaign is centered around. This section of the report adopts a different approach to conveying all this information as it allows the user to interact with a world map by selecting an individual country - it then displays the popularity of all cosmetic procedures offered within that region. Similarly, when you select a specific procedure from the list, it’s popularity across the globe is illustrated through the depth of color.

The findings of this global atlas are vast and expansive in their nature - but some interesting results that can be drawn is that India steers the world in regards to the popularity of Hair Transplant surgeries as well as Penis Enlargement procedures. Otherwise, the results are generally fairly evenly spread across the globe - with North and South America, Russia, and China being the figureheads across the majority of procedures.

Studies have shown that men and women now spend an equal amount of time and money on their personal appearance. This is indicative of modern times, where appearance is increasingly valued by both sexes. As a result, both men and women are going to increasing lengths to maintain their looks. This section of the report details surgical procedures based on gender. 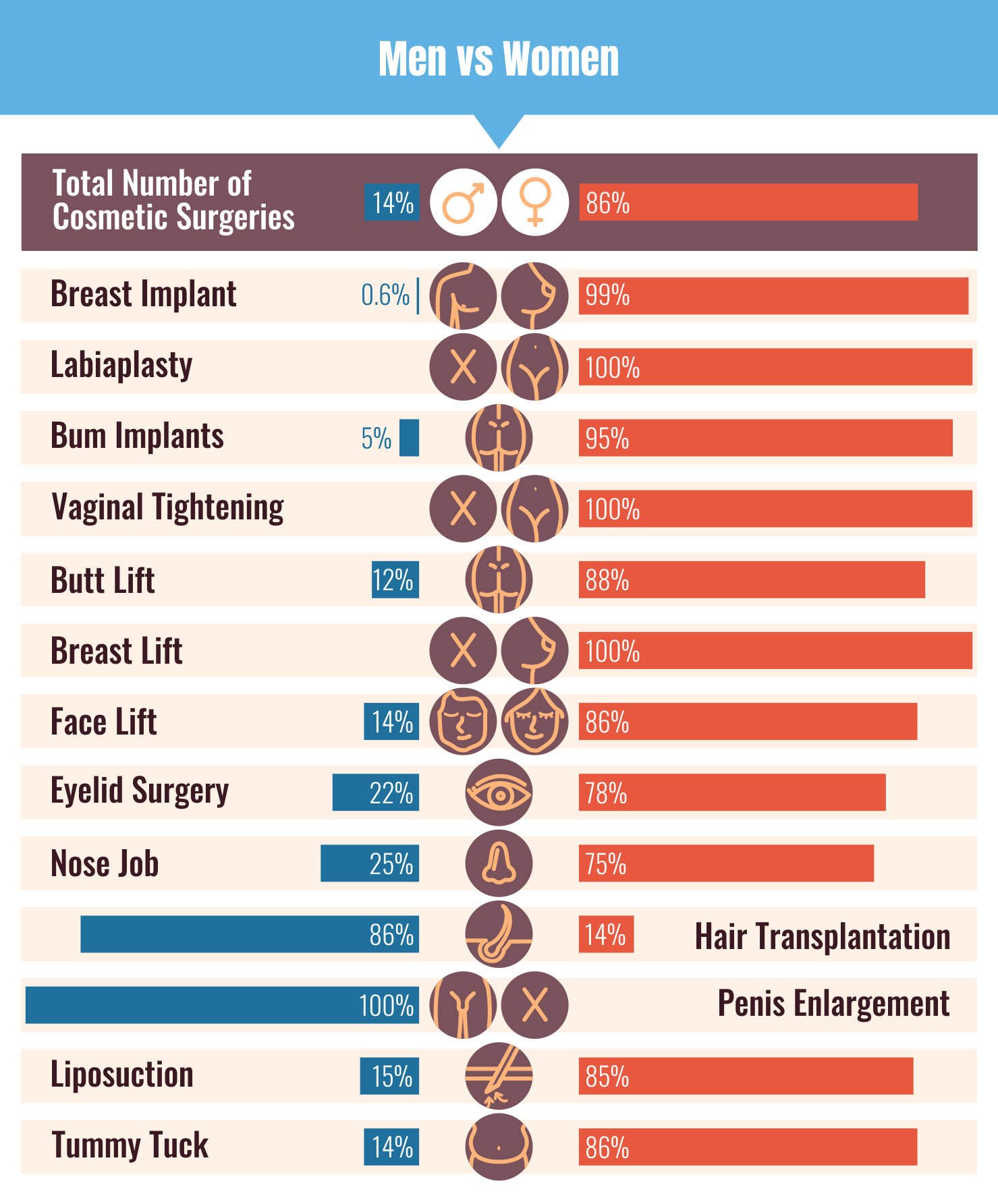 Women still vastly outweigh men in the number of procedures they undergo. A reason for this, however, could be that the majority of surgeries offered over the years have been tailored to women and those that are available for men, are often not for women. Of the procedures offered that do transcend gender constraints - such as liposuction and tummy tucks - the percentage of men undergoing these treatments is still outweighed by women by a large margin of 85% and 86% respectively. 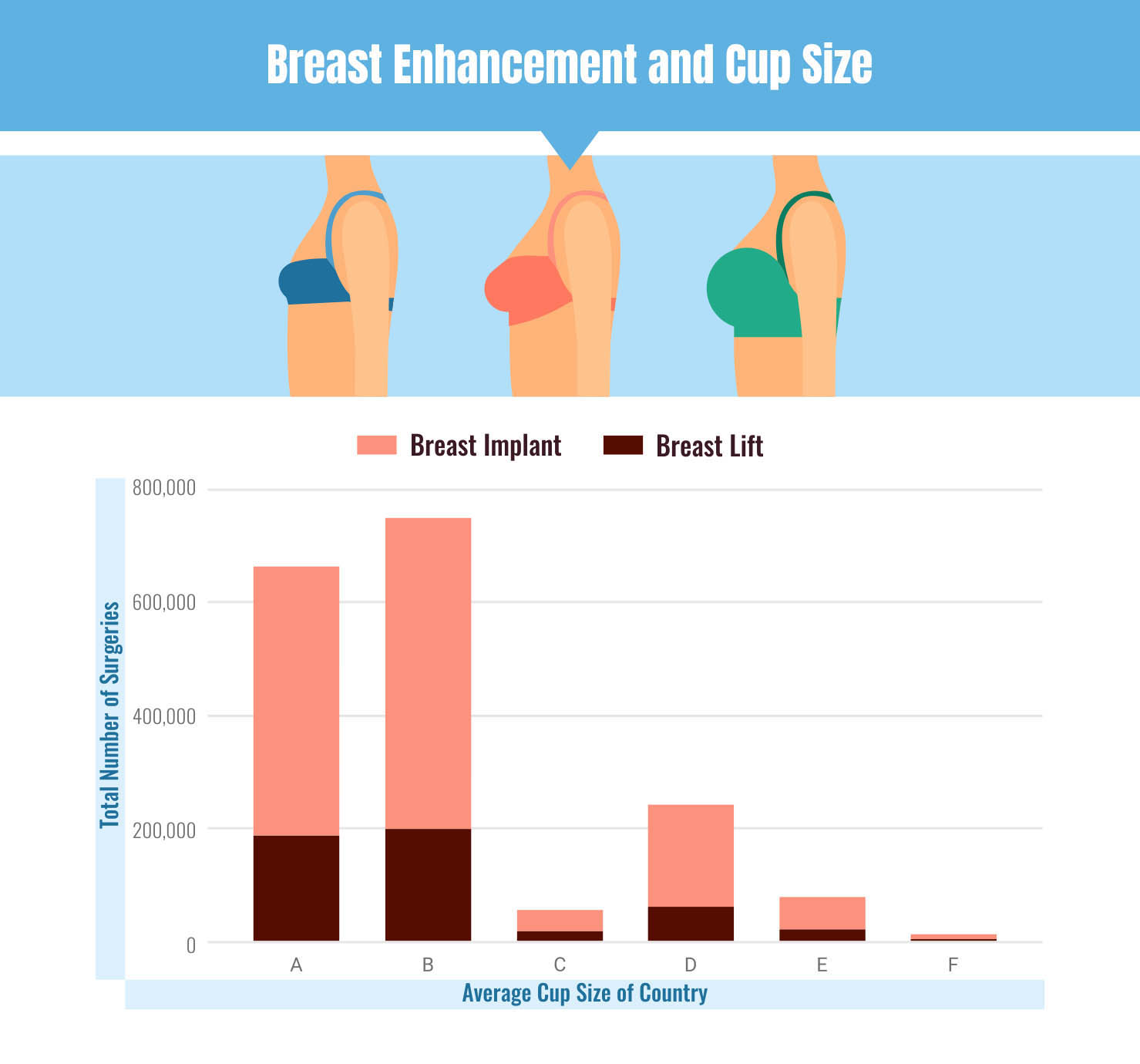 There are various cosmetic procedures available that can address issues faced by both men and women concerning their genitals. Procedures such as these can vastly raise self-esteem and confidence. This section of the report illustrates the popularity of such treatments across the globe for both men and women. 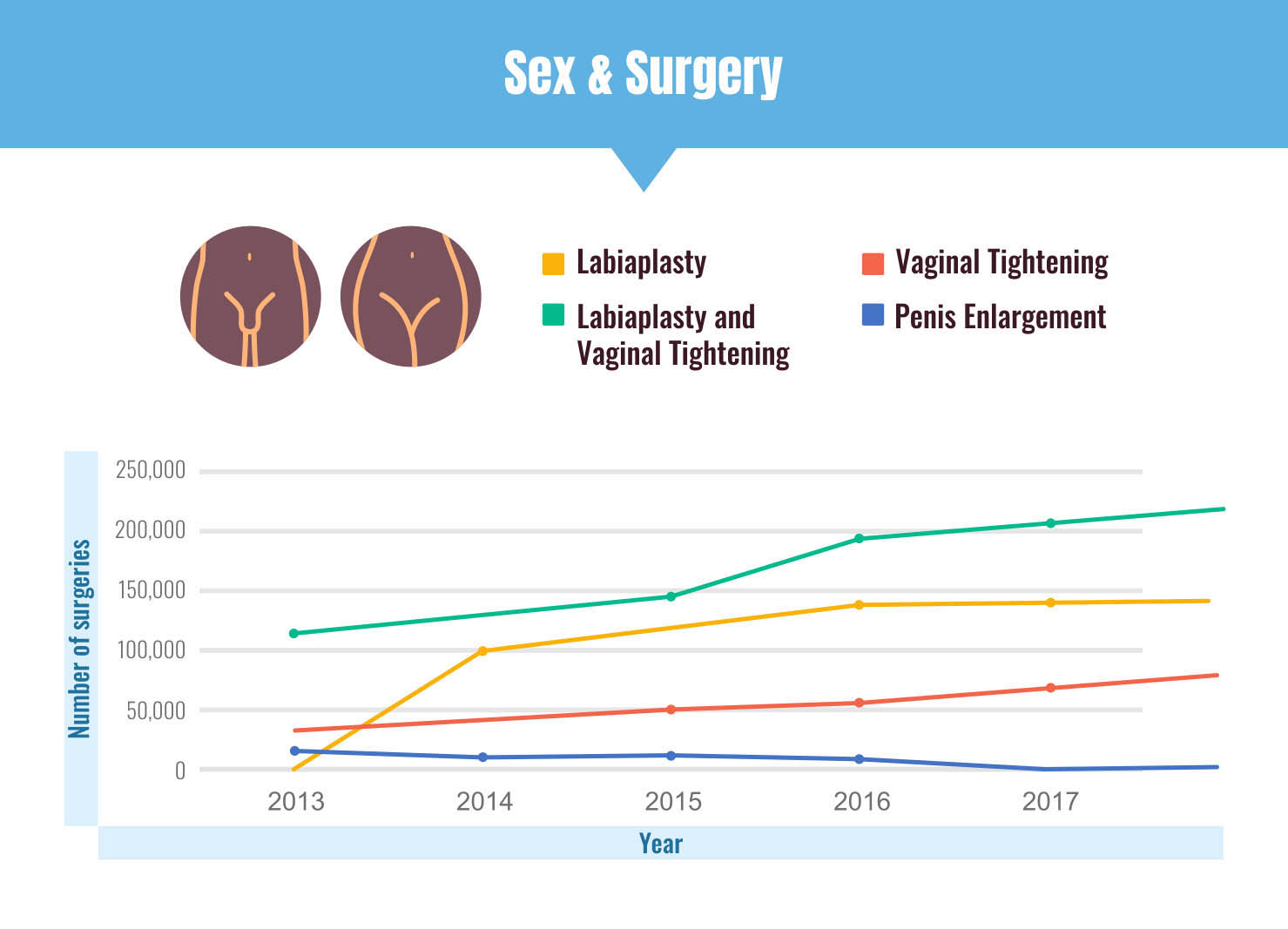 A trend that can be derived from the above graph is that the number of women undergoing various vaginal rejuvenation procedures has increased worldwide between 2013 and 2017. By contrast, the number of men undergoing penile augmentation surgeries has been on a steady decline, falling from a high of roughly 10,000 in 2013 to as little as 2,000 in 2016. Although 2014 did see a slight increase of around 1000 procedures, the decline has otherwise been constant. 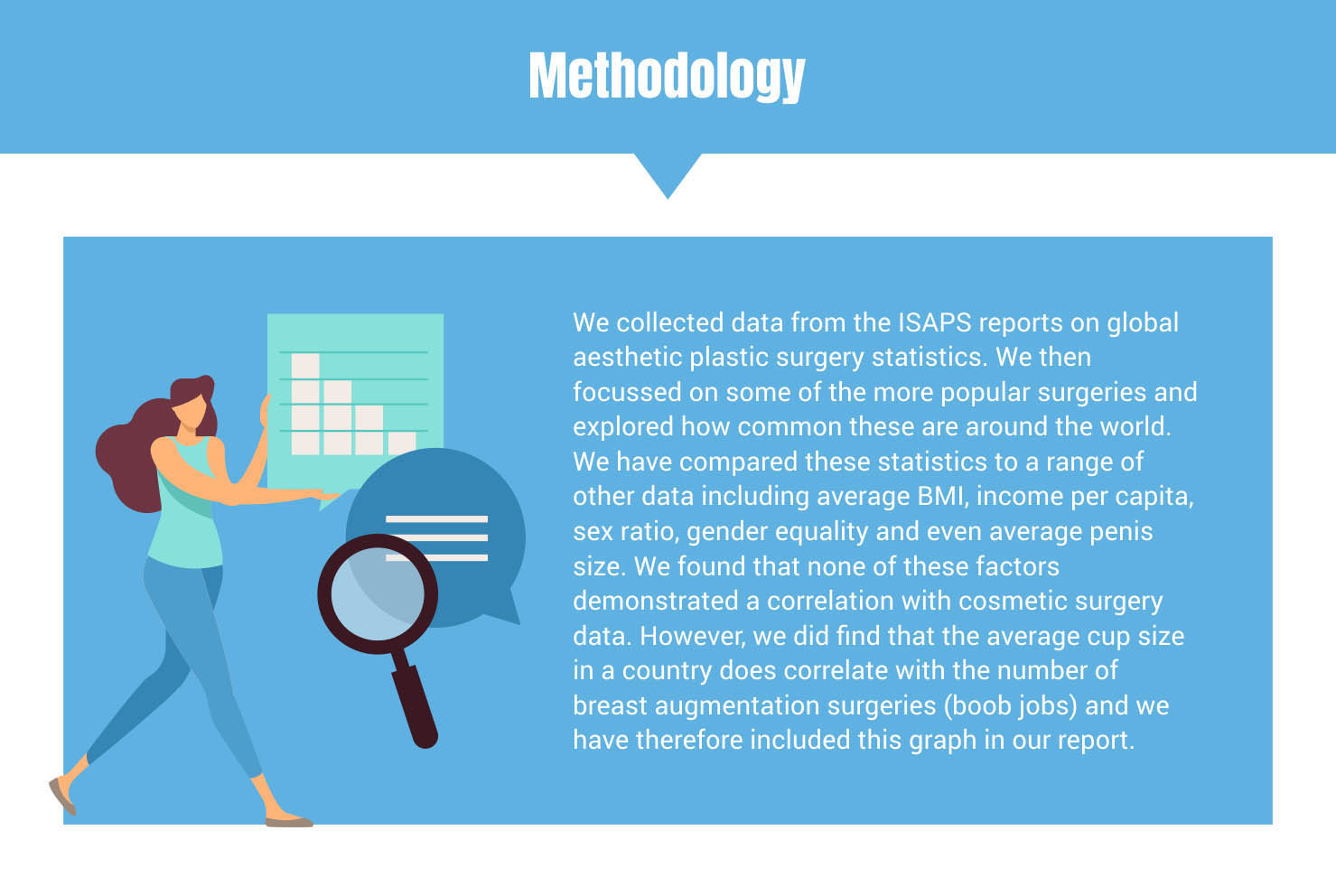 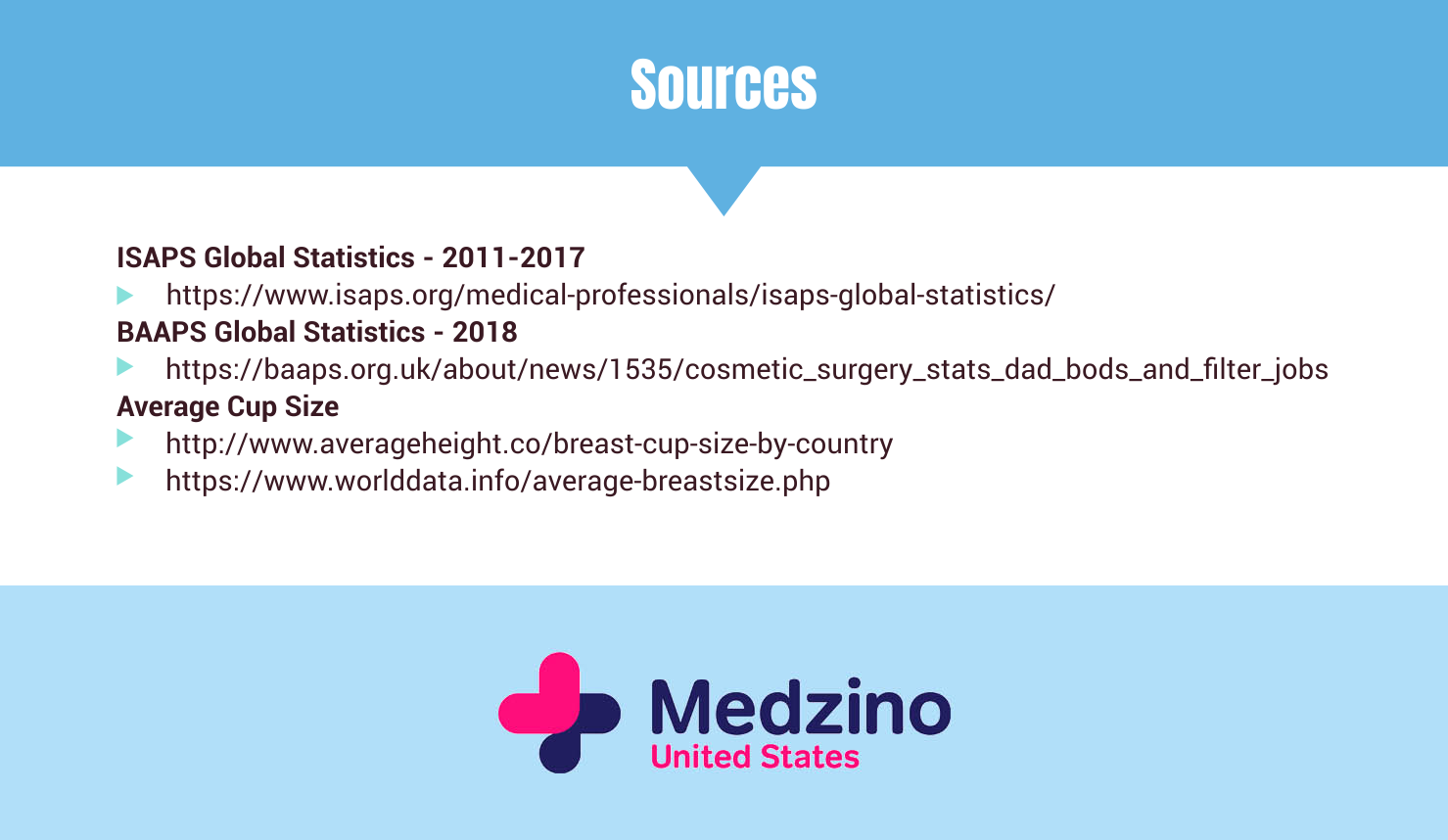