Nystatin cream is an antifungal medication used to treat infections caused by yeast. In an easy-to-apply cream, nystatin can relieve the symptoms of yeast infections and also cure the infection. 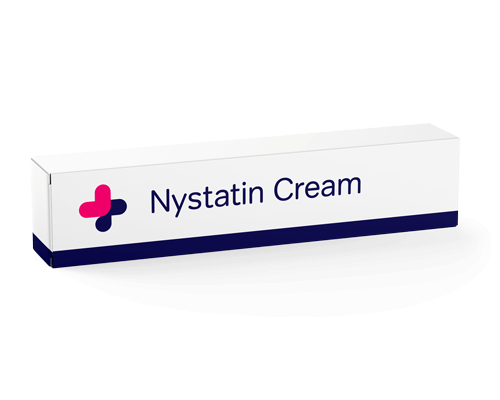 What is nystatin cream used to treat?

What is a yeast infection?

Yeast infections are caused by Candida fungi. This fungus is normally present on the skin and is kept in balance by the immune system and the barrier of intact skin. However, when this balance is disturbed, the fungus can replicate very quickly, resulting in a yeast infection. This balance can be disturbed by various factors, including stress, antibiotic use, skin abrasion, excessive perspiration and more.

How does nystatin cream work?

Nystatin cream stops the growth of the infection-causing fungus by destroying the fungus' cell membrane and cell walls. With these crucial structures compromised, the fungal cells die and are therefore unable to replicate.

Where can nystatin cream be used?

Nystatin cream can be safely applied anywhere on your body with the exception of the following areas: vagina, mouth, eyes, and inside the nose.

Who should avoid using nystatin cream

Nystatin cream should not be used by individuals who are allergic to any of the medication’s ingredients.

Ketoconazole is also an antifungal medication.  It can be applied topically and is often used in shampoos to treat scalp infections.

Unlike Nystatin, Ketoconazole can be prescribed as an oral medication to treat serious systemic fungal infections, although it has mostly been supplanted by safer alternatives.

The active ingredient in nystatin cream is nystatin with 100,000 USP units per gram.

Inactive ingredients and concentrations may vary between different manufacturers.

How is nystatin cream applied?

Nystatin cream should be applied as directed by your doctor. Typically, a thin layer is applied to cover the affected area twice daily. For best results:

The area should be cleaned and thoroughly dried before applying.
The medication should be applied at the same time every day.
Your hands should be washed thoroughly after application.

How long does it take nystatin cream to work?

Nystatin usually starts working after two days. However, it is important to complete your course of treatment as prescribed by your doctor, even if symptoms begin to disappear before you're done with treatment.

Why do I need to continue using the cream even if my symptoms go away?

Stopping treatment early may allow the fungus to continue to replicate and may cause the infection to return.

What if I miss an application?

If you miss an application, apply the medication as soon as you remember. If it is almost time for your next application, skip the missed application and resume your usual schedule. Do not apply two doses at a time to catch up.

Side effects have been reported in less than 0.1% of patients using nystatin cream.

Common side effects may include:

Speak to your doctor if any of these side effects cause severe discomfort or persist.

Is it normal for nystatin cream to burn?

Burning is a common side effect reported in patients using nystatin cream. The burning sensation should typically resolve within a few days as your body adjusts to the medication. If the burning continues to cause considerable discomfort, please speak with your doctor.

Can you get nystatin cream over the counter?

Nystatin cream is not available over the counter. This medication requires a prescription from a licensed doctor. You can order Nystatin cream directly from Medzino, and one of our doctors will review your medical information to make sure the medication is right for you before issuing a prescription. Click on the big pink button that says "Start your consultation" to get started with your order.

Can you use nystatin cream while pregnant?

The safety of Nystatin cream in pregnancy has not been adequately evaluated. Nystatin cream can be prescribed for a pregnant woman only if your doctor determines that the potential benefits outweigh the risks.

Can nystatin cream be used for diaper rash?

Nystatin cream is often prescribed to treat a diaper rash due to yeast, in babies. If you believe your child may have a diaper rash, please consult with your pediatrician so that they can help you determine the best course of action.

Is there a specific yeast infection treatment for men?