Paroxetine is FDA-approved as a non-hormonal treatment for hot flashes in menopausal females. It can help reduce the frequency of hot flashes without affecting your hormones. 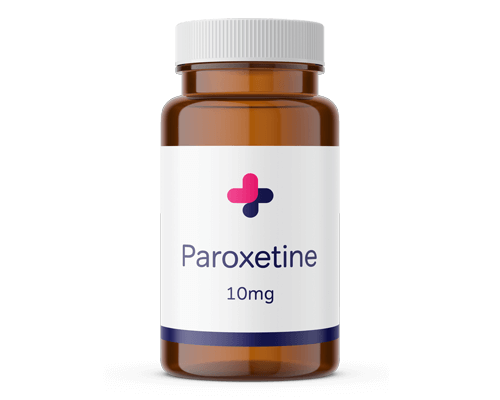 Paroxetine is an SSRI (selective serotonin reuptake inhibitor). SSRIs are a class of medications commonly prescribed as antidepressants, but were also found to be effective in reducing hot flashes in menopausal women.

Paroxetine is a selective serotonin reuptake inhibitor (SSRI). Serotonin is a chemical in your brain that is involved in nerve signaling and is often considered to be the ‘happiness hormone’. Serotonin also plays a role in helping you maintain a stable body temperature. Paroxetine works by reducing the amount of serotonin that can be reabsorbed by your cells, meaning there is more serotonin available. If more serotonin is available, you should be able to better regulate your body temperature.

What is Paroxetine used for?

How long does Paroxetine take to have an effect on hot flashes?

It can take a few weeks for Paroxetine to work. You should see a 33-67% reduction in the frequency of your hot flashes within 6-12 weeks. Some effects, including side effects, may occur shortly after you start taking Paroxetine.

How does Paroxetine make you feel?

Paroxetine usually takes about 4-6 weeks before having the intended effect. During this period, you may experience some side effects including anxiety or depression, but this varies from person to person. It is common to feel anxious or depressed initially when taking any SSRI medication but this should go away after the body becomes accustomed to the medication.  After 4-6 weeks, you should feel more like your usual self, and you should notice a reduction in your hot flashes. If you do not experience an improvement of symptoms at this time, or if you continue to experience significant side effects, you may want to speak to your doctor about alternatives.

Which Paroxetine ingredients can cause an allergic reaction?

Unless you are specifically allergic to one of the active or inactive ingredients, there is no ingredient normally associated with allergies. If you start taking Paroxetine and notice difficulty breathing, a rash or swelling of the tongue, face, eyes, or mouth, stop taking it immediately and proceed to the nearest emergency department.

What is the Paroxetine dosage for hot flashes?

The Paroxetine dosage for hot flash treatment depends upon which type of Paroxetine you are taking:

When should Paroxetine be taken?

Can Paroxetine be crushed or cut in half?

Paroxetine is available in different forms. Regular Paroxetine and sustained release (or controlled release) tablets should not be crushed or cut in half, as this would cause the medication to be released too quickly, exacerbating potential side effects.

Common side effects of Paroxetine include:

Please see the patient information leaflet for a full list of side effects.

Paroxetine should not be taken by individuals with a seizure disorder. Individuals with bipolar disorder, clinical depression or a significant anxiety disorder should be evaluated in person before starting paroxetine.

Over 450 drugs are known to interact with Paroxetine. This includes common drugs such as Zoloft and Aspirin, as well as some more unusual medications. Therefore, it is vital that you tell your doctor about any medications or recreational drugs that you are taking, to avoid any negative interactions.

Can I drink alcohol when taking Paroxetine?

Alcohol can exacerbate the side effects of Paroxetine, such as dizziness, nausea, and confusion. Therefore, it is recommended that you avoid drinking alcohol while taking Paroxetine.

Can I take Paroxetine when pregnant?

Can I take Paroxetine when breastfeeding?

A small amount of Paroxetine can be passed into breast milk, and a small number of babies have experienced side effects from Paroxetine. However, this is not considered to be a significant risk, so breastfeeding mothers of healthy children may be able to take Paroxetine. The prescribing doctor will help you weigh up the risks and benefits of treatment before prescribing Paroxetine. Paroxetine would not be prescribed for hot flashes in breastfeeding women; as a hot flash treatment, Paroxetine is only given to menopausal women, however Paroxetine does have other uses such as the treatment of depression.

Can Paroxetine make you sleepy?

Can Paroxetine cause headaches?

Headaches are a common side effect of Paroxetine. If you do experience headaches, you should avoid taking Aspirin as this can interact with Paroxetine.

Hormone replacement therapy is usually suggested for menopausal women experiencing hot flashes. Some women prefer to avoid hormone-based treatment, and in this case, antidepressants such as Paroxetine or Venlafaxine may be prescribed. Additionally, paroxetine may be better suited for women who have been diagnosed with breast cancer, specifically those who are not taking Tamoxifen.

Antidepressants such as Paroxetine and Venlafaxine are effective medications for hot flashes in menopausal women. However, not all antidepressants are considered to be effective in treating hot flashes. For example, Sertraline and Fluoxetine do not have any proven effect in this regard.

Paroxetine is not addictive, but it can produce withdrawal symptoms such as:

Can Paroxetine help you sleep?

Why is Paroxetine taken in the morning?

Paroxetine is usually taken in the morning because it can cause insomnia and difficulty sleeping.  If you experience significant side effects during the day, you could try moving your dose to the evening to see which time works better for you.

Why does Paroxetine cause weight gain?

Paroxetine is a generic drug and can be produced by a number of different manufacturers. Paxil and Seroxat are branded versions of Paroxetine manufactured by GlaxoSmithKline (GSK).

Are there lifestyle changes that can stop hot flashes?

Hot flashes can be a real pain, but unfortunately, it’s a reality that 75% of middle-aged women in the United States will have to endure for the best part of a decade (or longer, in some cases) as they transition into the menopause.

Side effects of hot flashes

Most (although not all) women will experience occasional or frequent bouts of hot flashes as they enter the menopause. The feeling is often described as an intense heat that appears as if out of nowhere, gushing through the face, neck and chest and causing uncomfortable symptoms like sweating, flushing, palpitations, and anxiety.

With all of the challenging changes women have to go through at different points in their lives - from their first period to pregnancy and finally menopause - it can easily appear as though their male counterparts have simply been dealt a better hand in the game of life. After all, not having to deal with a lifetime of bleeding, swelling, cramping, sweating, and mood swings (presuming everything is normal!) makes it easy to wonder why men get off so lightly. But did you know that men can also experience several far-from-ideal physical changes as they age?

When it comes to our hormones, it’s pretty much a lifelong balancing act keeping them at optimum levels so that all our bodily processes can function as normal. It’s no secret that shifting hormones can wreak all sorts of havoc during puberty, but walking this precarious tightrope can become especially challenging as we get older and our hormones become ever more volatile, particularly during stages such as pregnancy and the menopause.

How to deal with hot flashes

Hot flashes are a common side effect of menopause. Menopause is a normal part of aging in women around the age of 45-55. When a woman is born, she has all her eggs stored in her ovaries. During menopause, ovulation (release of an egg from the ovaries) stop and along with that so does a woman’s period. This means that women can no longer get pregnant naturally. Some women experience premature menopause, either due to the surgical removal of ovaries or the damage to the ovaries due to chemotherapy.