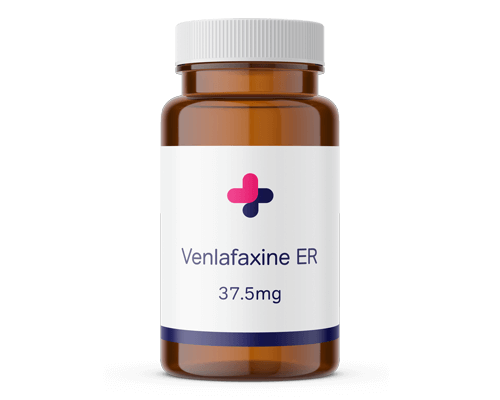 Venlafaxine is a type of medication known as a serotonin-norepinephrine reuptake inhibitor (SNRI). It can be used to reduce hot flashes in menopausal women.

What are Venlafaxine tablets used for?

Venlafaxine is most commonly used as an antidepressant, but it can also be used to treat hot flashes related to menopause.

Both serotonin and norepinephrine are chemicals used to signal between nerve cells in the body. They also play a role in temperature regulation. Venlafaxine helps prevent these chemicals from being reabsorbed once released, improving their signaling power so that you can modulate your body temperature more easily.

Can Venlafaxine be used for hot flashes?

Venlafaxine is prescribed for the treatment of hot flashes in menopausal women.

How long does it take for Venlafaxine to work for hot flashes?

Venlafaxine reduces the frequency of hot flashes by 47.6% within 8 weeks.

Where to get Venlafaxine

Venlafaxine is available by prescription from most pharmacies, including Medzino.

The active ingredient in Venlafaxine is venlafaxine hydrochloride.

Inactive ingredients can vary between different manufacturers. Effexor is a branded version of Venlafaxine made by Pfizer. It contains the following inactive ingredients: cellulose, iron oxides, lactose, magnesium stearate, and sodium starch glycolate.

Which Venlafaxine ingredients can cause an allergic reaction?

If you are allergic to lactose, Venlafaxine can cause you some side effects you would normally experience when consuming lactose. The tablet always contains E110 (yellow coloring), which can cause allergic reactions in some people.

How to take Venlafaxine for hot flashes

Take one 37.5 mg Venlafaxine SR (sustained release) daily for one week, and then increase your dose to 75 mg per day. You must not crush, chew, or break Venlafaxine SR tablets, as this would cause the medication to be absorbed too quickly, resulting in significant side effects. Always take Venlafaxine as prescribed by your doctor.

When is the best time of day to take Venlafaxine?

When to increase the dose of Venlafaxine

Your Venlafaxine dose should be increased after one week when it is used to treat hot flashes. The initial dose is 37.5mg daily for the first week. After the first week, the dose increases to 75mg daily.

How to stop Venlafaxine for hot flashes

You should only stop taking Venlafaxine if instructed to do so by your doctor or if you experience significant side effects. To stop Venlafaxine, you should reduce the dose to one 37.5mg per day for one week before the date you intend to stop.

Are Venlafaxine tablets and capsules interchangeable?

Capsules and tablets are interchangeable, providing that the strength of the medication is the same, for example, a 5mg tablet is interchangeable with a 5mg capsule. However, sustained-release or extended-release medication is not the same as regular tablets or capsules. You should check with the prescribing physician if you are unsure.

Common side effects of Venlafaxine include:

Please ensure that you read the patient information leaflet for a full list of side effects.

Venlafaxine should not be taken by anyone with uncontrolled high blood pressure.

Venlafaxine can interact with over 600 different medications and recreational drugs. Therefore, it is vital that you discuss any drugs you are taking with the prescribing physician.

Can I take Venlafaxine when pregnant?

Venlafaxine may increase the risk of birth defects if used during pregnancy. The risks vs benefits of Venlafaxine will be considered by your doctor, before deciding whether to prescribe Venlafaxine.

Will Venlafaxine make me gain weight?

Appetite stimulation is a side effect of Venlafaxine. This can lead people to increase their calorie intake, which can lead to weight gain.

Will Venlafaxine make me sleepy?

Will Venlafaxine help me sleep?

Venlafaxine can induce drowsiness, which may help you sleep, but insomnia is also a reported side effect of Venlafaxine. For this reason, if you experience difficulty sleeping, it is recommended that you take Venlafaxine in the morning.

Will Venlafaxine give me energy?

Side effects of Venlafaxine include drowsiness and difficulty concentrating. Therefore, you are more likely to feel tired than energized when taking Venlafaxine.

Can Venlafaxine cause hair loss?

Can Venlafaxine cause memory loss?

Memory loss is a side effect of many antidepressants, including Venlafaxine.

Can Venlafaxine cause depression?

Venlafaxine is an antidepressant, but some people do find that Venlafaxine can temporarily cause or worsen depression.

Can Venlafaxine cause muscle pain?

Muscle pain is a known side effect of Venlafaxine. If you experience muscle pain, you should stop taking Venlafaxine and speak to your doctor as soon as possible. This specific side effect usually starts soon after starting the medication.

Venlafaxine CR will increase blood pressure in approximately 3% of patients taking a dose between 75-150mg.

Which is better: Venlafaxine or HRT?

Hormone replacement therapy (HRT) can help menopausal women avoid many of the side effects of menopause, including hot flashes and more serious conditions such as osteoporosis. However, not all women want to take HRT, and for some women, HRT is contraindicated. For women who do not want to, or cannot take HRT, antidepressants such as Venlafaxine or Paroxetine can provide relief from hot flashes.

Venlafxine can be prescribed for the treatment of generalized anxiety disorder and social anxiety disorder. However, some people do report worsening anxiety as a side effect. The results can vary from person to person.

Where is Venlafaxine made?

Venlafaxine is a generic medication, so it can be produced by a number of different pharmaceutical companies. Effexor is a branded version of Venlafaxine that is manufactured by GlaxoSmithKline (GSK).

Who can prescribe Venlafaxine?

Venlafaxine can be prescribed by a doctor, but depending upon which state you are in, a physician assistant or nurse practitioner may be able to prescribe Venlafaxine as well.

Where is Venlafaxine hydrochloride metabolized?

Venlafaxine is well absorbed and extensively metabolized in the liver. The drug and the metabolites are then excreted by the kidneys.

Are there lifestyle changes that can stop hot flashes?

Hot flashes can be a real pain, but unfortunately, it’s a reality that 75% of middle-aged women in the United States will have to endure for the best part of a decade (or longer, in some cases) as they transition into the menopause.

Side effects of hot flashes

Most (although not all) women will experience occasional or frequent bouts of hot flashes as they enter the menopause. The feeling is often described as an intense heat that appears as if out of nowhere, gushing through the face, neck and chest and causing uncomfortable symptoms like sweating, flushing, palpitations, and anxiety.

With all of the challenging changes women have to go through at different points in their lives - from their first period to pregnancy and finally menopause - it can easily appear as though their male counterparts have simply been dealt a better hand in the game of life. After all, not having to deal with a lifetime of bleeding, swelling, cramping, sweating, and mood swings (presuming everything is normal!) makes it easy to wonder why men get off so lightly. But did you know that men can also experience several far-from-ideal physical changes as they age?

When it comes to our hormones, it’s pretty much a lifelong balancing act keeping them at optimum levels so that all our bodily processes can function as normal. It’s no secret that shifting hormones can wreak all sorts of havoc during puberty, but walking this precarious tightrope can become especially challenging as we get older and our hormones become ever more volatile, particularly during stages such as pregnancy and the menopause.

How to deal with hot flashes

Hot flashes are a common side effect of menopause. Menopause is a normal part of aging in women around the age of 45-55. When a woman is born, she has all her eggs stored in her ovaries. During menopause, ovulation (release of an egg from the ovaries) stop and along with that so does a woman’s period. This means that women can no longer get pregnant naturally. Some women experience premature menopause, either due to the surgical removal of ovaries or the damage to the ovaries due to chemotherapy.