Prevent pregnancy with the Ella morning after pill

Ella 30mg is a morning-after pill. In other words, it is an emergency contraceptive to prevent unwanted pregnancy if you engaged in unprotected sex or if your birth control failed (e.g. your partner’s condom broke, you lost track of your “safe days”, your partner did not pull out). Ella 30mg is also known under the generic name Ulipristal. You will find here information on Ella 30mg pill, which doctors at Medzino can issue a prescription for if you are suitable. 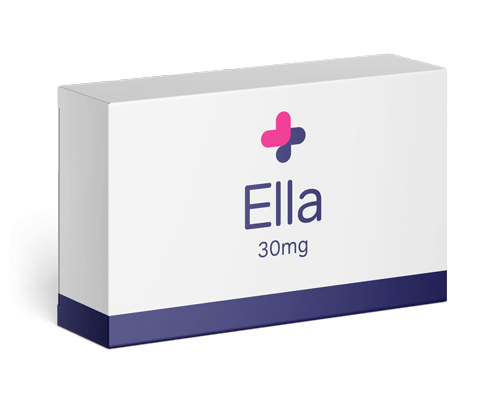 We’re proud to trusted by our customers

Ella (30 mg) is a morning-after pill.  In other words, it is an emergency contraceptive to reduce your risk of getting pregnant if you engaged in unprotected sex, forgot one or more doses of your scheduled birth control, lost track of your “safe days”,  were forced to have sex, or if your birth control may have failed (e.g. your partner’s condom broke or your IUD became displaced).  Using the withdrawal method is not a reliable method of contraception in general, however, if unintentional ejaculation occurs during penetration, Ella be used to prevent pregnancy.

Ella is also known under the generic name Ulipristal.  It is to be used for a single episode of unprotected sex or suspected failed birth control, and reduces your chances of getting pregnant by 85% - 98%  if taken as recommended.  It is meant as an emergency contraceptive only and not as a replacement for regular birth control methods. Please note also that Ella is not indicated for termination of an existing pregnancy and does not protect you against sexually transmitted infections (STIs) including HIV.

How does Ella work?

Ella works by preventing ovulation (the release of an egg) during your menstrual cycle. It also makes vaginal fluid become thicker so that sperm won’t reach an egg (fertilization), and prevents a fertilized egg from attaching to the womb by changing the lining of the uterus.

How effective is Ella?

If you had sex around the time of ovulation, Ella is more effective than Plan B in preventing a pregnancy, as it has an increased ability to withstand the rising hormone levels that are triggered by the release of an egg.  Additionally, Ella may be more effective than other emergency contraception (excepting IUDs) for preventing pregnancy in individual who weigh over 155 pounds.

Who should take Ella?

Ella is indicated for women of childbearing age, including adolescents, who have had unprotected sex, or whose regular method of birth control unsuspectedly failed, within the preceding 5 days. The pill may not be effective in women who are overweight, distinguished by a body mass index of 30 or above, or taking certain other medications, including hormonal birth control. Speak with your doctor for more details on whether Ella is the right choice for you.

Ella contains the active ingredient ulipristal acetate at a concentration of 30mg.

How should I take Ella?

If you suspect an unwanted pregnancy due to failed birth control or unprotected sex, take the Ella tablet orally (by mouth) as soon as you can within 5 days (120 hours), but not later than that. You can take Ella during your menstrual cycle, day or night, with or without food. If for any reason you throw up within 3 hours of taking Ella, you may need to take another dose, as the medicine may not have had time to absorb and take effect.  If you feel you may need to take another dose of Ella, contact your physician before doing so.

What should I do if it has been more than 5 days since I had unprotected sex?

If it has been more than 5 days since you had unprotected sex, the emergency contraceptive pill will have no effect in protecting you against pregnancy. In case you do become pregnant, there are several options available to you. Depending on individual circumstances, you can choose to give birth, and raise the child; undergo a medical procedure that terminates the pregnancy; or give birth and place the child under the permanent care of another person or family. If you have fallen pregnant unintentionally, consult your doctor for advice on the above options, and which one is most suited for you.

In some people, Ella may provoke an allergic reaction. If you experience symptoms such as hives, difficulty breathing, swelling of the face/tongue/throat, seek immediate medical help.

Common side effects include:

For some women it may be that their next period comes earlier or later than expected, heavier or lighter than usual. If your period is more than a week late, you should take a pregnancy test.

If you experience severe lower abdominal pain within 3-5 weeks of taking Ella, you should seek medical attention to check for an ectopic pregnancy (when a fertilized egg attaches itself outside of the womb, usually in one of the fallopian tubes). This condition places you at risk of serious or critical hemorrhaging.

Some drugs or herbal products may interfere with the effectiveness of Ella. Avoid using Ella at the same time as the following drugs or herbal products: Barbiturates, Bosentan, Carbamazepine, Felbamate, Griseofulvin, Oxcarbazepine, Phenytoin, Rifampin, St. John’s Wort, Topiramate. Also, avoid using Ella in combination with other hormonal contraceptives as this may prevent Ella in delaying ovulation (the release of an egg), which is how Ella works to prevent pregnancy. You should not take Ella if you are already pregnant and/or are breastfeeding. Consult your doctor in case of any uncertainties.

There are several options of emergency birth control available to women who have had unprotected sex. Ella is overall the most effective pill for preventing an unplanned pregnancy; however, if you are taking emergency contraception because you missed your hormonal birth control, there are alternatives that may be more suited to you. Other factors that influence the type of emergency contraception you decide to take include:

Plan B contains levonorgestrel, and is most effective when taken within 24 hours of having unprotected sex; its efficacy will subsequently begin to decrease the longer the interval between intercourse and ingesting the pill. If taken within 24 hours, the pill can reduce the risk of pregnancy by up to 95%; after around 72 hours, this will drop to around 89%. If you usually take hormonal birth control such as the ring, patch or shot, then Ella may not work as well as Plan B. Furthermore, Plan B is easier to obtain than Ella as it can be purchased over the counter, as opposed to through a doctor’s prescription. While Ella – and other emergency contraception – is effective in preventing a pregnancy, it should not be used as a substitute for regular birth control. As the name indicates, such contraception should only be used in emergencies, as opposed to on a consistent basis. Regular contraception has increased efficacy, fewer side effects, and is less expensive than the morning after pill.

The intrauterine device (IUD) is another viable option for women who require emergency contraception. This is a small, t-shaped device, made of copper and plastic, that is inserted into the uterus to prevent an egg from being fertilized. It may be inserted up to 5 days after unprotected sex and is proven to be around 99% effective. Unlike the morning after pills, an IUD can safely be left in as an ongoing contraceptive method for several years, and will not interact with any other medications.

How is Ella different from other emergency contraceptives?

Ella is the only morning-after pill that is effective within the 24 hours around ovulation (the release of an egg) when the risk of getting pregnant is highest.

Can Ella cause an ectopic pregnancy?

There is no evidence to suggest that emergency contraceptives, including Ella, increase the risk of an ectopic pregnancy (when a fertilized egg has implanted outside of the womb); however, this does not completely rule out the probability of such a pregnancy occurring. An ectopic pregnancy is a serious medical condition, and you should seek immediate medical attention if you experience sharp, shooting pain in the abdominal area after taking the pill.

What can influence the effectiveness of Ella?

Ella is only effective when used for a single episode of unprotected intercourse; you must make sure that you use your regular method of birth control the next time you have sex. If you usually take hormonal contraceptives, you must wait a period of 5 days after using Ella before you can resume your normal birth control method, as the morning-after pill can reduce their contraceptive effect.

Ella should not be used more than once in a single menstrual cycle, as the safety and efficacy of its repeated has not been sufficiently evaluated.

What should I do if I vomit after taking Ella?

Emergency contraception, including Ella, can cause nausea and/or vomiting. If you throw up within 3 hours of ingesting Ella, you should take another dose, as it would have not been properly absorbed into your bloodstream. If you vomit after 3 hours of taking the pill, you are not required to take another dose.

How safe is Ella?

There have been no reports of any serious complications from taking Ella. The pill is generally safe to take, given that it is taken in accordance with the proper instructions.

How does Ella affect your period?

After taking Ella, your next period may be up to 7 days earlier or later than usual; you may also experience a heavier blood flow. If your period is more than 7 days late, there may be a chance that you are pregnant; you should take a pregnancy test to confirm this, and subsequently consult your doctor.

Prescription fees enable our U.S. qualified doctors to offer a remote consultation and issue a prescription if that is the appropriate outcome for your case. We want to make healthcare pricing transparent and affordable that's why we set the doctor's fee at a flat rate of $15 for all services which is lower than most copays. The $15 medical fee does not include the cost of the medicine.

It looks like you are in Germany Or UK

To get a tailored experience and the best prices,
choose your local site below:

Delivery to US only

Delivery to the UK + EU