Avoid pregnancy with Plan B One-Step morning after pill

Plan B One-Step 15mg tablet is an emergency contraception commonly known as the ‘morning-after pill’ to prevent pregnancy in case you had unprotected sex, or if your contraception method failed. In the following article, the reader will find information about Plan B and its effect, how it works, the ingredients it contains, recommended dosage and how to take the drug, some warnings, as well as general side effects. Doctors at Medzino can issue a prescription for Plan B if you are suitable. 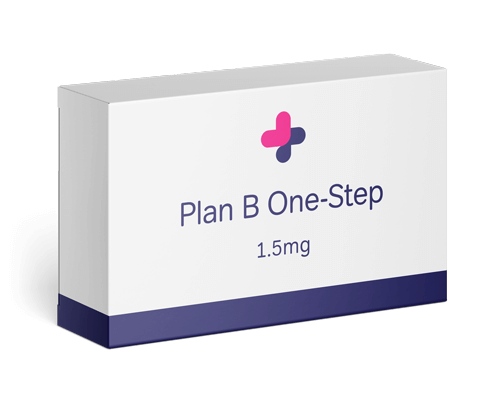 We’re proud to trusted by our customers

What is Plan B?

Plan B One-Step, also known as the morning-after pill, is a single tablet that you can take to prevent pregnancy if you have had unprotected sex, missed your scheduled birth control, or suspect that your birth control may have failed.

Some situations where you might want to use plan B include: your partner’s condom tore, you lost track of your “safe days”, you missed one or more doses of your regular birth control, your diaphragm slipped out of place, you were forced to have sex. Using the withdrawal method is not a reliable method of contraception in general, however, if unintentional ejaculation occurs during penetration, Plan B can be used to prevent pregnancy.

Plan B does not in any way affect your chances of getting pregnant in the future. However, please note that Plan B is not indicated for termination of an existing pregnancy (abortion) and does not protect you against sexually transmitted infections (STIs), including HIV. Do not use Plan B if you are pregnant or think you might be pregnant.

How does Plan B work?

How effective is Plan B One-Step?

Plan B One-Step is most effective when taken soon after having unprotected sex; its efficacy will subsequently begin to decrease, the longer the interval between intercourse and ingesting the pill. If taken within 24 hours, levonorgestrel pills can reduce the risk of pregnancy by up to 95%; after around 72 hours, effectivity drops to around 89%. Therefore, it is important that the pill is taken as soon as possible after sex for it to have optimum effect.

Who should take Plan B One-Step?

Plan B One-Step is intended for women who have had unprotected sex within a period of 72 hours and wish to prevent pregnancy.  There are several circumstances under which a woman is at risk of becoming pregnant unintentionally. These include:

Plan B contains the active ingredient levonorgestrel at a concentration of 1.5mg.

How to take Plan B

Take Plan B One-Step 1.5 mg tablet orally (by mouth) as soon as you can within 72 hours of unprotected sex or failed contraception. The sooner you take Plan B, the better it works. You can take Plan B during your menstrual cycle, day or night, with or without food. Do not take more than one dose of any kind of morning-after pill, as it might make you feel nauseous and will not increase protection against pregnancy.

If for any reason you throw up within 2 hours of taking Plan B, contact your doctor or healthcare provider immediately to discuss whether to take another dose.

What should I do if it has been more than 72 hours since I had unprotected sex?

If you had unprotected sex more than 72 hours ago, then Plan B One-Step will no longer be effective in preventing a pregnancy. In this case, you will have to either take Ella – an alternative emergency contraception – or have an IUD inserted into your uterus. Both methods can be employed up to 5 days after unprotected sex to effectively protect against an unwanted pregnancy.

Plan B One-Step Side Effects

Common side effects include:

For some women it may be that their next period comes earlier or later than expected, heavier or lighter than usual. They may also experience changes such as spotting or bleeding before their next period. Take a pregnancy test if your period is more than a week late.

If these symptoms persist or cause distress, talk to your doctor.

Seek medical attention if you experience severe lower abdominal pain 3 to 5 weeks after taking Plan B in order to evaluate for an ectopic pregnancy.  An ectopic pregnancy is when a fertilized egg attaches itself outside of the womb, usually in one of the fallopian tubes. This condition places you at risk of serious or critical hemorrhaging.

Seek medical attention if you experience an allergic reaction to Plan B (hives, difficulty breathing, swelling of the face/tongue/throat).

Plan B is contraindicated in the case of known or suspected pregnancy. Plan B is not an abortion pill.

There are several options of emergency birth control available to women who have had unprotected sex. Plan B, and other pills containing generic levonorgestrel, are most effective when taken within 3 days of having sexual intercourse; however, there are alternatives, which can work up to 5 days after sex.

Ella contains ulipristral acetate, which works by altering the body’s progesterone levels to delay or prevent ovulation, and is just as effective when taken on day 5 as it is on day 1 after sex. This option is best for women who have had sex during the time of ovulation when the risk of falling pregnant is highest. It may also be more effective for women who are overweight or obese – with a BMI of 26 or more. While Plan B – and other emergency contraception – is effective in preventing pregnancy, it should not be used as a substitute for regular birth control. As the name indicates, such contraception should only be used in emergencies.  Regular contraception is more effective, has fewer side effects, and is less expensive than the morning after pill.

The intrauterine device (IUD) is another viable option for women who require emergency contraception. This is a small, t-shaped device, made of copper and plastic, that is inserted into the uterus to prevent an egg from being fertilized. It may be inserted up to 5 days after unprotected sex and is proven to be around 99% effective. Unlike the morning after pills, an IUD can safely be left in as an ongoing contraceptive method for several years, and will not interact with any other medications.

Does Plan B One-Step interact with other medications?

Always inform your doctor of the drugs or herbal products you are taking as these may interfere with the effectiveness of Plan B. Avoid using Plan B at the same time as the following drugs or herbal products: Barbiturates, Bosentan, Carbamazepine, Felbamate, Griseofulvin, Oxcarbazepine, Phenytoin, Rifampin, St. John’s Wort, Topiramate.

What would Plan B One-Step do if I am pregnant?

If you think you may already be pregnant, you must not take any emergency contraception. Although the hormones in Plan B, or any other levonorgestrel pills, will not harm the fetus, it will not be effective after conception, as it is intended to prevent a pregnancy that has not yet occurred.

What should I do if I vomit after taking Plan B?

Emergency contraception can sometimes cause nausea and/or vomiting. If you throw up within 2 hours of taking Plan B, then you need to consult your doctor or pharmacist, as you may need to take a second dose. If you throw up more than 2 hours after taking the pill, then it should still be effective – you do not need to do anything.

Is Plan B an abortion pill?

Plan B does not cause a miscarriage or abortion; its properties are very different to RU-486 – the abortion pill. Because Plan B will not prevent the development of an egg that has already been fertilized and implanted in the uterus, it will not work if it is taken once you are already pregnant.

How does Plan B affect your period?

Plan B can cause some changes to your menstruation. You may find that your next period, after taking Plan B, comes as much as a week earlier or later than usual; you may also notice that your blood flow is significantly heavier, with more days of bleeding. Such experiences are completely normal after taking emergency contraception and should not be a cause for concern. If, however, your next period does not come through at all, then you should take a pregnancy test.

How many times can you take Plan B?

While manufacturers advise that you only take Plan B – and other generic levonorgestrel – once, you may take it more than once during your monthly cycle without it causing any serious side-effects. However, if you find that you are often relying on it, you should think about taking regular birth control, as it is more effective.

Prescription fees enable our U.S. qualified doctors to offer a remote consultation and issue a prescription if that is the appropriate outcome for your case. We want to make healthcare pricing transparent and affordable that's why we set the doctor's fee at a flat rate of $15 for all services which is lower than most copays. The $15 medical fee does not include the cost of the medicine.

It looks like you are in Germany Or UK

To get a tailored experience and the best prices,
choose your local site below:

Delivery to US only

Delivery to the UK + EU